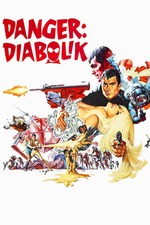 For all of its eccentric sets and occasional flashes of psychedelia, this was a bit surprising in its rather flat presentation. The trailer suggests a garish, over-the-top James Bond/Matt Helm-like adventure with excess in every frame. Despite a scene where the two main characters make love on a spinning bed under and among millions of dollars, and a tracking shot of a line of hipsters smoking buddha, the movie goes about its tasks with a low profile, with less energy than expected.

DANGER: DIABOLIK coasts on its '60s vibe alone, but director Mario Bava (better known for horror flicks) fails to give the movie any real zip or pace. It's serviceable and competent, but unimaginative. Far too long, too. Not the expected grindhouse guilty pleasure. Bava's screenplay dutifully goes through the paces, but it all feels stale, despite a few eye filling moments and attractive vistas. Ennio Moricone's score is deliciously overwrought.

But I really dug the sets, especially the underground fortress in which the finale plays out. Diabolik's pad is also very cool. Maybe some Bel Air or Palm Beach residents sought a similar look for their cribs.