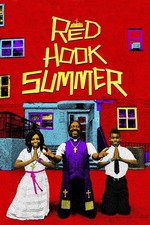 Red Hook Summer was shot in 19 days. And it’s still somehow one of the greatest films of the 2010s... God bless Spike Lee! (Yes, the God reference is intended)

Look, I think it’s time to admit something that should have been abundantly clear for a long time to a lot of people - Spike Lee deals in duality. Yes, BlacKkKlansman is the obvious example, but almost all of his films focus on what are and what should be as individual concepts. Bamboozled has the link between future and past within entertainment, When The Levees Broke balances so beautifully harrowing tragedy with hope and resistance and bringing the fight to the man, etc. Do The Right Thing specifically hones in on this idea, showing the reality and constantly prodding the audience to remember what could have been - the reality of the story is always darker than the dreamy notebook version, it’s just a fact.

And so, Red Hook Summer plays this hand of duality within the context of the church. It spends the majority of the first ninety minutes carefully setting up these ideals - God-loving, hustle-denouncing, spirit-saving, education-loving, tradition-following, need I go on? - and then flips the book on the head when suddenly the notebook version - the expectations, the hope - dies out because reality never is quite how we expect.

The methodical direction here obviously takes its time intentionally within those first ninety minutes, and whilst it does provoke some harsh subject matters during that time - the struggles with AIDS within the Hook, decaying hope and belief and especially the sharp look into teen thoughts of suicide when they begin to recognise the generational cycles put in place to hold them under - it isn’t until after reality rears its ugly but oh-so important head that things become clearer.

The truth is that the church - not religion, but the church! - is equally dangerous as the hustler who, too, sucks away at the spirits and souls of the young who surreptitiously seek small solace! And whilst we all have our struggles, especially the poor (I love how Spike makes a point of going beyond speaking of the struggles of his people and goes on to say that all poor are on the “bottom rung”, it is one of the few and far between times I’ve felt truly seen by a movie in this specific way), Spike directs this and spins his yarn in such a way that it is one of the very few truly hopeful films I have ever seen.

How many films have you seen where it ends horribly for the true underdog? So often, even in the films that see the oppressed, it is still the oppressor who wins the battle! And yet here, Spike clearly states that whilst the oppressor may have beaten us down over the years, we are the ones who will win the war and find freedom eventually.

It all links back to each character working as something of a synecdoche for their given problem. The Bishop is the church, deeply, deeply flawed but not completely lost, Flik represents all young oppressed people who turn to creativity as an outlet and gives hope, Chazz represents those who feel lost and eventually find their way back through the love of their true friends, her sister represents all of those who have been lost to ignorance, Box represents the hopeful creative (much like Flik) who loses himself in trying to keep their creativity alive.

It’s a heart wrenching film, admittedly, but there is something so intrinsically and essentially hopeful behind all of this that is so important. The world isn’t perfect, it never has been, and it never really will be, but things can be better if we keep open minds, if we stay focused on what is right and wrong, etc. The world can be amazing.