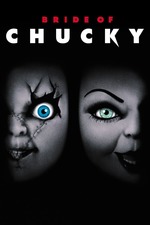 On why Tilly's performance here is one of the best of the 90s...

We can have our own reservations for Bride of Chucky. I’ve seen some who think it’s a meta, comedy-horror 90s movie that missed the mark in 1998, and still misses those marks to this day. I’ve also, interestingly enough, seen entire scholarly articles considering it a ‘masterpiece’. Take it or leave it, the film either works for you, or it doesn’t. But the film itself is not what this thread is about, oh no. This thread is focusing strictly on the leading actress of the horror movie: Jennifer Tilly.

I strongly believe that we as a culture, especially in the States, get a little too focused on a more conventional description of what constitutes “great acting”. Trust me, I’m all for those gritty, near-realistic depictions of damaged people that makes their way on the independent cinema screens, just as much as those scenery devouring performances that get nominated for Oscars every year. But there seems to be only a small niche appreciation for performances that are of the camp variety.

There are many camp (and likewise, kitsch) films and performances that have been critically-acclaimed over the years. We have the films of John Waters, for starters - and then we have some of the more kitschy behaviors of most Sam Raimi films which showcase a B-movie style through A-grade Hollywood production. But there's often a time when it can be argued that the "so-bad-its-good" can be identified as appropriately camp, by way of "unintentional merit" in art (say, those who get a kick out of Troll 2, or even go as far as to put auteur theory into the incompetence of Tommy Wiseau's The Room). But camp isn't always unintentional. It can be derived from an intent to be excessive, colorful, artificial, and more akin to plugging the more classical acting of the Golden Age of Hollywood (over-enunciation of speech; mascara running down the face to signify sadness) into the realm of cinema that has been moreso defined by naturalistic acting.

Back in 1931, it wouldn't be surprising to think that Greta Garbo’s “I want to be alone! ” sequence from the Academy Award-winning Grand Hotel was seen as some very fine, emotive acting from a theatrical standpoint. However, this same scene wouldn’t be fit in something like The Social Network. By today’s consensus of what constitutes “good” acting, we'd see that Razzie win coming from a mile away with some hostile Twitter comments and memes floating around to poke fun of it.

But this understanding of the “camp style” in the post-Marlon Brando world of screen acting is why I want to bring up Tilly’s work in Bride of Chucky. The film itself never takes itself seriously, as it’s completely a comedic genre flick set for summer release and featuring animatronic dolls as serial killers. The premise itself is already on track for being deemed “schlock”. But what sets it apart, is that the film is - production-wise - very colorful. Tilly’s character, Tiffany, herself, is a trailer trash stereotype; sporting Goth makeup and clothing, chain-smoking and cursing like a sailor. She delivers such lines as “well hello, Dolly” and “sweet dreams, asshole” as if they’re a part of her vocabulary and not trashy comedic attempts at comedy in the screenplay. The character feels like a John Waters creation - adding on the other dimension that she’s a psychopath without any remorse for slicing another person’s throat to get what she wants (putting her right there with Beverly Sutphin in Serial Mom and Dawn Davenport in Female Trouble.)

But why is Tilly so fantastic in this role? Because, her style of acting in the role is exactly what the character needed. It’s pure, unadulterated camp. She’s thoroughly committed to the character as if she’s real, but the tone of the film reminds us that it’s all fantasy. But she never clashes with the atmosphere, she adds density. She doesn’t hold back from impeccable comedic timing (like having a neighbor help carry a dead body from her trailer home to the trunk of her car), she embraces the cheesy dialogue, and then - in some weird way - makes you feel some kind of bizarre, gross sympathy for her.

I think of this scene more than anything when it comes to my defense of this performance. Everything about it? Absolutely silly. But there’s something so convincing about Tilly. She’s chewing the scenery, but there’s a fire in her. She says all of these crazy plot points, and somehow makes us believe she means it. You also see character pathos; from dementedly happy, to heartbroken, and then ultimately to anger - and it’s all consistent with the camp approach. And the clip above ends with her crying, convincingly, next to a murdered man in her bed - using a blood-drenched pillow to hold as she tries to piece herself back together. There’s something so energetic about her in this film. She’s completely crazy, completely unrealistic, but I’d be damned does she make this animated character feel like a real person with real issues and real pain. All while acting to an animatronic puppet.

I do see a resurgence of adoration for camp performances (there’s been a recent re-appraisal of Faye Dunaway’s Razzie-scoring work in Mommie Dearest, for example - even in the scholarly/theorist groups), but I don’t think there’s enough of a love for the type of roles that seem to be the antithesis to your emotionally-distressed Oscar-winning biopic. Bride of Chucky isn’t a film to win Academy Awards, but there’s just as much conviction, characterization, energy, emotion, and skilled comedy that goes into something like what Tilly did in that film.