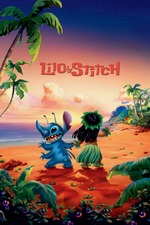 Lilo and Stitch is probably the most feminist film Disney has done. It’s also - outside of that theory applied to it - one of the more under appreciated of the Walt Disney Animation Studios filmography. What it manages to do was never done before it, nor has it been done after it. A film about family and about death - and about sisterhood; told through the perspectives of two sisters and their alien pet. There aren’t any princesses or princes; nor any virtue of authority via means of gender roles. There aren’t any love interests - and the one that could be considered is based refreshingly in the light of the woman being compatible with another person. There isn’t anything within the plot that has this be necessary, nor to solidify that character as having a place in the world where she’d need that, or not. Better yet, it's set in contemporary times.

The two sisters, Nani and Lilo, lost their parents to a stormy car crash - Hollywood cliche style. But there’s poignancy in this - as Lilo herself now feels compelled to feed sandwiches to a fish in the Pacific because, as she argues or imagines, it controls the weather; and she wants to prevent anyone else from suffering the loss she has. Nani is her much older sister, and she’s stepped into the role of maternity with social services breathing down her back. Unfortunately, with little to no experience in being motherly or having the kind of responsibility expected from her - and Lilo’s own rebellious antics that cause conflict - Nani is placed in a situation that no other Disney character has before or since: she’s forced to be an adult, and she’s doing it out of the simple compassionate love for her sister.

Of course, the animated theatrics of the story involve an alien falling from outer space is posing as their family pet, but that material is delightfully kitschy in a mesh of humor and science fiction. While the drama - as deft as can be - is going on, the humor itself doesn’t distract from the soul it supplies. In fact, by the end of the film, you kind of realize how in-tune it was with the drama, in the first place. The “alien” itself isn’t necessarily a subtle archetype or symbol - because it quite bluntly represents the being of an outsider or external force that doesn’t conform or fit in. Stitch, the little blue alien, is just that. An alien. But so is Lilo.

The animation of Lilo and Stitch is simply sublime. Watercolors are all over the place, giving a net-rotoscope vibe of 70s Disney, but painting Hawaii as a beautifully abstract, gorgeous world. It’s contrasted almost seamlessly by the two-dimensional and defined characters, and their immediate surroundings. In this way, the watercolors give a dimensional eye to the frames that recalls the soft-focus of film itself. But the excitement and beauty of it is in the simple fact that it’s animated to be such a way without the use of literal blur or fuzz. When you set this colorful imagery next to the music Elvis Presley, you have the film’s one and only pop culture reference - which is refreshingly absent in the dawning of an age in which DreamWorks started wrecking havoc with such lazy references.

There’s a scene where the social worker sees Lilo “punishing her friends” by placing voodoo replicas of them into a pickle jar. He realizes she’s odd. But the greatest touch of her development as a character is that she herself doesn’t - and that the movie never once asks her to change or gain the conformity of the other girls who only find her strange and bully her.

I can say a lot about Lilo and Stitch. I could ramble on and on about certain scenes, their wit and their heart - and their way of balancing both out - as a challenge - without seeming to break a sweat. The affectionate bond between the two sisters is felt, and the alien as symbol for all the drama is a way to introduce the playful, animated aspects of it all without destroying all the material with misguided post-Shrek elements. When family is broken, it can be healed simply by realizing that it cannot be broken - not even with death. That’s a powerful, truly real, moral that isn’t said often - and certainly not in such a witty, entertaining, and genuinely hilarious way.