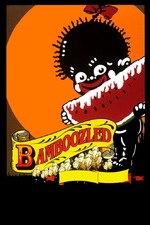 Blackface, black talk, black hair and black skin. Black music and black stars and black food and black culture. Black swagger and black incarceration. Black lives. Black deaths. You can't take one without taking it all, and to think you can only makes you part of the problem.

Bamboozled, a spiteful, hateful, and rightful satire from Spike Lee, except what he satirizes almost seems mild compared to the landscape we're in twenty years later. It starts with black man Delacroix in a news network who keeps getting his scripts turned down because they portray black people too positively, too intelligently, too ordinary, too human. No, what his boss wants is something shocking and provocative, something that'll make the white audiences tune in because what they want to see is spectacle and show, not black people who live like them. That would be too humanizing.

But you seen, his boss loves black people. He has a black wife and black kids and speaks black like the brothers, how can he possibly be racist in any way shape or form? Delacroix is well-spoken, he's a Harvard-educated man, now doesn't that sound like his boss is blacker than him?

This is the plight Delacroix is in, a black man who's seen as un-black by his white peers yet remains black when his blackness can be used against him. He's tired, he's tired of creating these shows that make him make people who are caricatures of the past. So he creates a show that will get him fired, one that makes no deceit about its minstrel nature.

And it's successful, in fact it's widely, wildly successful. It's okay, it's okay, it's satire guys! This black man created something and says it's okay! You can laugh, you can point, you can jeer and you can cheer, because at the end of the day you'll rest easy knowing a black man approved this. And we all know that when a person of color says something's okay, you get a pass on that for the rest of your life!

Yeah, no. Obviously. If you are white then your efforts to unprogram your learned racism do not end at asking your PoC friend if something's okay. It does not end when you see one PoC say they don't mind something dubious. It does not end at the first sign of PoC approval. Because if you end there you are still being racist. Yes, you are, because you do NOT want to think, you do NOT want to question your beliefs, you simply want a PoC to think for you, to feed you an answer so you don't have to get there yourself. You reduce them to ambassadors of their dignitary tribe while also refusing to critically think yourself. Yes, the Lorax may speak for the trees, but one black person does NOT speak for ALL black people. Asking questions is good, it's the first step down the road, but you better be prepared to learn from many different people. You have to understand and actually think about it all.

Because at the end of the day how can you truly understand and respect a culture when you only choose to take in bits and pieces you want? You can't; that's just tourism, swooping in when it's trendy and taking off when it's painful, but that's the reality of those living it who can't just fly away from their blackness when they feel like it.

Those white folks watching Delacroix's show? They may 'love' blackness then, they may see the black people there, they may even wear black skin and black hair and speak black talk during it! But you can be sure that they wipe it all off when the show ends and the credits roll so they can return to their white lives with none of the black pain.

But those black folks? What's there to wipe? That's just who they are.