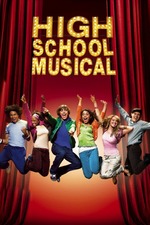 When I booted this file up to stream, I felt like I must've accidentally downloaded the sequel because it opened with Troy and Gabriella almost immediately singing karaoke together. Turns out that's just the opening and that this movie movies fast.

"Well, you sound like you've done a lot of singing, too."

"Yeah, my showerhead is very impressed with me."

High School Musical is a funny movie. I'm both sure of yet unsure why it became so incredibly, infectiously popular. It's got a fun story, a colorful cast, and most importantly some surprisingly great songs throughout, but was this enough to really propel it into being one of the most successful movie brands ever? So popular that it'd be widely recognized across the world (let alone the states) and spawn two sequels and a whole line of merchandise? And keep in mind this was two years before Marvel started their reign with Iron Man.

It might just be because we've invented a sort of American High School Mythology that's easily recognizable elsewhere. Much of popular culture around the world stems from us, and it makes sense that the movies we make geared towards a younger crowd also appeal to young international crowds who value American culture. It might be because musicals are still incredibly popular internationally too (just look at the influence of Bollywood in Asia), being more relevant outside the States than in – I'd argue that this movie is much closer to Bollywood than anything else.

And so High School Musical feels like a fascinating global product: wholly American in "origin" yet drawing upon an international appeal. The kids and school and songs are American, but that might honestly mean more to non-Americans than to us.