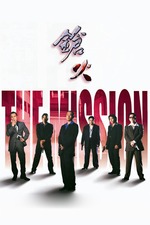 This movie is cool. Like, downright cold as ice. Like I get chills just thinking about it. Does a cooler movie exist?

There is an intuitive logic to this film. Do your job, I'll do mine. There is no need for words. We're here because of the mission. None of us care for each other much. Yet, there's an unspoken bond, perhaps the strongest of them all, because this stranger next to you might be the only thing keeping you alive. You love him. He loves you. Now defend him with your life. There is no need for words.

I swear to god I've seen one particular scene here least twenty times by now. It exemplifies everything I love about this film. The best way I can describe it is if you've ever played a competitive team-based game with strangers and find yourself in total sync. It's rare, but when it happens it's pure frisson and your opponents don't stand a chance. Yet, there is no celebration, no translation of intent between one another, no time to even think about anything beyond the movement of your body and the purpose of your role; because there is no need. You know, and they know, and you simply perform.

Johnnie To understands this, and understands how to translate it to film. Men who have lost their humanity become men no longer, becoming abstracted ideals of coalition and coordination as the sounds of gunshot ring against their unmoving frame. Transcending individuality, they metamorphose into pure exhibition, the execution of which reaching the highest form of symbiosis. There is not a single wasted action by these strangers nor a single wasted word, and likewise, not a single wasted frame in this 80-minute experience.

This is the coolest movie ever.