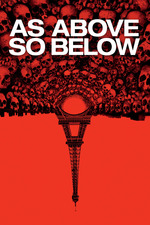 Not sure how I missed this on previous watches but As Above, So Below is basically a found footage version of 1999's The Mummy. We've got a very pretty and spunky young archeologist who brings a reluctant male (and possible love interest) on a journey through the Paris catacombs to find the Philospher's Stone and ultimately what could be the gate to hell.

The setting alone is reason enough to give this a try as it was apparently mostly filmed in the actual catacombs below Paris with all six million boney corpses. After watching a few movies that were all done on a sound stage or aquarium, it was a breath of fresh air to have something actually set within a really cool landmark.

The acting and production value are at a higher caliber than your typical FF movie, but it eventually falls into the tropey traps of headache inducing shaky cams, "why are they still filming this" annoyances, and nonsensical plot devices.

""We have to rectify ourselves! and jump" down a bottomless pit. Yeah, right.

But spending an hour in the Paris catacombs made it at lot funner than I usually have with found footage flicks.

AFTERNOTE
What spurred me to re-watch this tonight was an email notification I got from a Patreon account I recently joined for new digital art that was titled "As Above, So Below" It's a fantastic piece of work. What's even cooler about it is that the artist is Letterboxd's very own Savage, master of folk horror and killer lists. Her artwork is awesome.Each piece has a great story behind what she was trying to go for in her work.

[Full disclosure: she doesn't know I'm posting this and I get no commission for the referral. And you need to shell out $3-$5 to actually see the art. But it's way more valuable than a coffee IMHO]