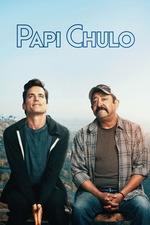 John Butler’s Papi Chulo is a shrill and insipid spectacle of cross-cultural communion, but don’t call it stupid, as that would suggest that it doesn’t know exactly what it’s doing. For one, “papi chulo” is pointedly never spoken in the film, which traces the emotional breakdown of a TV weatherman, Sean (Matt Bomer), reeling from a recent breakup and who desperately strikes up a friendship with a Latino migrant, Ernesto (Alejandro Patiño). “A vicious circle,” says Sean, describing the unpainted part of his deck beneath the enormous potted plant that he once nurtured with his ex, whose name Sean conspicuously relays over voicemail as if trying to tell us something that the film otherwise refuses to explicitly acknowledge: “That is it…,Carlos, the last vestiges of us have now been swept away.” If only.

To read the rest of my Slant review, click here.