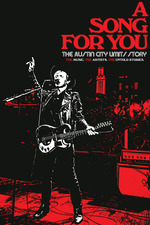 Can music bring you to tears? Not necessarily the words, but just pure, honest music? It does to me. As a long time fan of Austin City Limits, I'm really kind of ashamed at how few episodes I've actually watched. However, I really respect the show for being just music. No pyrotechnics, no fancy stuff, just musicians and an few hundred people for an audience. This doc celebrating 40 years of ACL covers how they began the show, how it has evolved, and goes into a lot of the stars who have appeared. Beginning as a show to showcase Austin and Texas music (Willie Nelson, Lightnin' Hopkins, Jerry Jeff Walker, Stevie Ray Vaughn, Doug Sahm, etc.), it expanded to including almost anyone who's a luminary in their field (Ray Charles, BB King, The Pixies, Merle Haggard, Dolly Parton, Loretta Lynn, Kris Kristofferson, etc.). Seems odd to me that the cover here has Beck on it. Not that there's anything wrong with Beck, but any one of those I named would be more appropriate. There is not a lot of concert footage (well, a lot of snippets of concerts and rehearsals), it's mostly a talking head doc (how appropriate that I would use that term as the show ends with David Byrne on stage).