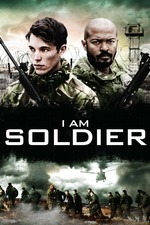 I Am Soldier has the skeletal structure of a good film. It's in there... However, it gets let down by its Hollywood-wannabe action ending, and streaky SAS promotion moments.

The acting can be hammy at times, but for the most part I was really happy with the performance of Tom Hughes here. I think he is a young British actor that could really move on to do some good films.

The hyper-realism and brooding tone was my favourite thing about I Am Soldier, and really gave me a take on 'building up the soldier' that I had not considered before. If only it had left out the dead best friend storyline, which was so over the top.

Decent, but slipped into too much cliche to be a good film...