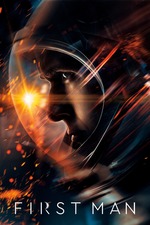 there are no words that could do this experience justice, any expectations/hype i know you have, just keep it exactly there where it is right now when you walk in when this comes out. i don’t think i’ve ever watched a film this loud before, i’ve never had to cover my ears in my life even in war films in imax, and i did with this, i’m not exaggerating. but the silences are just as loud. i’ve seen my fair share of sci-fis/space movies to call myself a huge fan of them and there is nothing like this one, i haven’t been this amazed since interstellar (though i don’t want to pit them against each other ever)  and that for anyone who knows me says a lot. some parts of this were scarier than hereditary and it is impossible to believe this is chazelle’s third film, fucking impossible. ryan brings something to this performance i’ve never seen from him, a vulnerable performance without one explicitly oscar bait scene, but absolutely worthy of one nonetheless (i would’ve bet money he’d wear a white suit tonight while we waited for everyone on the red carpet and guess WHAT, anyway) some of the choices were just bold as fuck (from the music to some scenes/directing choices) and i always respect that in a space movie, especially when everyone feels entitled to preach on how they should be ALL THE TIME and criticizes the shit out of every second of them, loved that from damien

i was supposed to take my dad (who taught me to love film and is a huge sci-fi fan) to the festival but he couldn’t make it so i took my mom who isn’t even big AT ALL on anything sci-fi and she was bawling by the end of it, you’re not ready for this