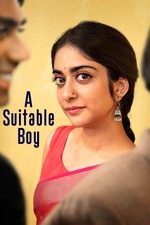 Vikram Seth's sprawling epic novel has been brought to the television screen as a 6-part miniseries by Mira Nair. The book is one of the longest English language novels published in a single volume and the tv adaptation probably doesn't do it full justice in just 6 episodes. The story is a fascinating look at a newly post-independence, post-partition India as the story, set in 1951, follows the lives of four families, and in particular the two main protagonists around whom the two main plots revolve. Lata (Tanya Maniktala) is a 19-year old college student, whose domineering mother is on the lookout for a suitable boy for her to marry. She starts out dead against the institution of marriage but soon finds herself being pursued by three suitors - Kabir (Danish Razvi) is a Muslim student at her university who is obsessed by her. Amit (Mikhail Sen) is an acclaimed poet and author, educated in England, who is her Bengali sister-in-law's brother. And Haresh (Namit Das) is a simple but enterprising and determined shoe manufacturer. Lata's story revolves around the choice she is forced to make between her suitors. The second main plot revolves around Maan (Ishaan Khatter), the highly romantic, feckless son of a State Minister who has to suddenly grow up after his life takes strange twists and turns. He falls passionately in love with an older courtesan and musician, Saeeda Bai (Tabu), who reciprocates his feelings but realises that their affair is doomed. Both Tabu and Ishaan Khatter bring a deep sense of erotic longing to their scenes which are depicted in a sexually frank manner. And in doing so easily lift the film up by a notch or two. The melodramatic story encompasses everything from family intrigues, politics of the nation, extra marital affairs, incest, homosexual longing, mob riots involving Hindus and Muslims and attempted murder. Mira Nair deftly handles all the interconnecting story lines keeping a sharp eye on the smallest details involving the eye-popping production values that bring a bygone era to life. Every character, no matter how briefly shown, is instantly relatable, and one immediately gets a sense of their life arc - Shahana Goswami as the slutty but gregarious Bengali sister-in-law, Randeep Hooda as her slick lover, Manoj Pawhwa as a fat and sleazy Nawab who is a regular client of the courtesan, Ranvir Shorey as an opportunistic backstabbing servant and Vijay Varma as a disgruntled villager. The film has been criticised for not doing justice to the book but then not many adaptations measure up to the original. Not having read the book was probably a plus point for me as I found the story throroughly engrossing, although I felt it could have been far better sketched out with a couple more episodes. The most jarring aspect of the production for me was the dialogue spoken almost entirely in english. The story would have been more visually alive and authentic if the entire dialogue had been spoken instead in Hindi and Urdu with a smattering of english as it happens for real in India.