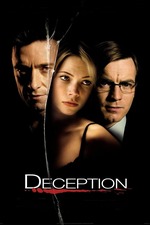 Potboiler posing as a slick erotic thriller has nothing really new to offer. The film has a strong whiff of deja vu - a been-there-seen-that kinda plot. Timid accountant (Ewan McGregor) befriends a charming lawyer (Hugh Jackson) and before he knows it he is upto his ears in lurid anonymous sex, blackmail, a kidnapping and murder. Michelle Williams is the woman who has him platonically transfixed while on the side he plays whoopee with Natasha Henstridge, who is his first encounter as a member of an exclusive sex club, and Charlotte Rampling is the older woman who teaches him rules about the sex club before showing him age is no barrier to good sex. The ludicrous twists and turns in the plot come at a fast pace although none of them are surprising. Skip this film unless you want to know how sex clubs work.