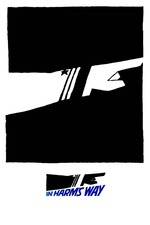 Old fashioned film was the last all-star WWII epic shot in black and white by a major studio. Panned by critics when it first came out the film actually works despite its soap opera trappings with a number of exciting action sequences scattered throughout. The film follows the lives of a group of Naval officers and their wives and girlfriends stationed in Hawaii - the film begins with the attack on Pearl Harbor - and across the Pacific islands as the Japanese offensives increase. The screenplay ensures a relatively unromantic and realistic view of the American Navy and desists from presenting events with a patriotic fervour usually always present in all the war films made during the 1940s which reeked of propaganda. Leading the main plot is John Wayne as a disgraced Captain who later becomes an Admiral given a diificult assignment. We follow his relationships with a fellow officer (Kirk Douglas) - a psychological mess after his trampy wife (Barbara Bouchet) is killed with her lover during the attack on Pearl Harbor, his prickly relationship with his estranged son (Brandon de Wilde) who is in love with a young nurse (Jill Haworth). She is the roommate of a doctor (Patricia Neal) with whom the Admiral falls in love - a striking mature romance with Neal giving a superb performance (she won a Bafta award) as the world weary but optimistic nurse who thaws rigid Wayne. Tom Tryon and Paula Prentiss play another couple going through war traumas while senior officers on the periphery are played by Burgess Meredith, Dana Andrews, Franchot Tone and Henry Fonda as Admiral Nimitz who figures during the pitched sea battle at the end when many of the cast members either die or are wounded. Adding to the drama is an unfortunate rape, a suicide and the perpetrator making "amends" during a suicide mission. Shot in stunning wide screen - Loyal Griggs was nominated for an Academy Award - with a rousing score by Jerry Goldsmith, the film is great entertainment with the use of excellent special effects during the battle sequences.

It Happened in Broad Daylight