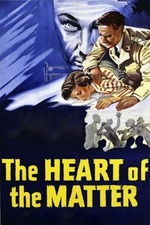 The Heart of the Matter

Graham Greene's story about Catholic guilt with everyone wallowing in it. In colonial Sierra Leone - 1942 - a British policeman (Trevor Howard), stuck in a miserable marriage, finds love with a shipwreck survivor (Maria Schell). When his staunch Catholic wife (Elizabeth Allan) finds out she nags him to go to church to confess his sin which he is not prepared to do causing everyone a great deal of stiff hand wringing and misery. Extremely well acted by the three leads (both Howard and Schell were nominated for Baftas) and the fine supporting cast - Denholm Elliott, Michael Hordern, Peter Finch. The film superbly creates the opressive atmosphere (shot by the great Jack Hildyard on location) where you can literally feel the humidity and wretched conditions all around. The downbeat situation has Howard's face betraying his stiff outward demeanor as his inner demons conflict with his religious beliefs. It is a great performance as he portrays one of Greene's most tortured characters with the plot a serious argument against Catholism for anyone wanting to convert.