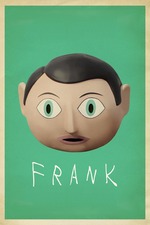 I would've been very skeptical about this entire thing prior to watching it if almost anyone else had been cast in the role of 'Frank'. But knowing it was The Fass-man underneath that damn mask, I knew he would still somehow be able to give a genuine and substantial performance, even if his face was concealed for the majority of it.
And, for once, I was right about something. But only 'cause he's Michael fuckin' Fassbender..

Oh yeah, I loved the film overall as well.