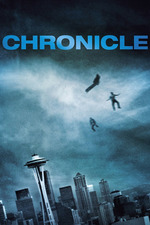 As a child, I always wished I had superpowers. Not to save people or do any of that cliche superhero stuff, but just to enjoy myself, flying around and shit. Can you relate too? That's the massive reason why I found ''Chronicle'' so appealing. It's probably the most realistic film of the genre I've seen thus far. Hell, if this movie didn't exist, and I became a director/screenwriter, I'd probably have made a movie very much like this one. The ''found-footage'' technique used in the film... yeah, I don't know if it was really necessary, but it did add a layer to the movie in making it feel realistic (not that it needed a look of authenticity; the excellent performances and script were enough for me). I wasn't pleased with certain plot developments, like how they got the powers in the first place, a certain airplane sequence and a scene involving a lightening strike. Those quibbles aside, this is one of my favourite movies from 2012 so far. Worth watching.