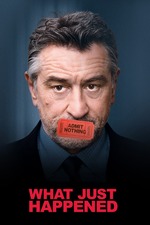 ''Hello. France. Where liberty is cherished. Where the individual is cherished. I send my love. Making this movie has been and remains to be a ball-busting, intestine-wrenching, blood-rendering experience. Not just for me but for all involved. It comes from my heart. So, for those of you that are moved when you see this film, I am your servant. And for those of you that are not moved, for those UNTALENTED LEECHES IN HOLLYWOOD who try to impose their ill-gotten will, you can all KISS MY HAIRY ASS AND THEN BLOW ME! Merci. Merci.''

A dog, whose life or death, and by extension - a film's success, depends on some editing to satisfy either the mass approval, or artistic vision; which shall it be? Bruce Willis' 6-month old beard must go before filming starts... but will he conform? And, to come: Brad Pitt starring in a movie as a Florist (that would be a no from me).

I've read What Just Happened being characterized as a tame Hollywood satire, and while I wouldn't disagree that some parts do play out as such (satire is hyperbolic truth, after all), I just see it more as a true to life (or rather, a mostly believable) depiction* of the personal and professional life of ''one of the 30 most powerful producers in Hollywood.'' That might be called superficial or even boring material, perhaps, but all I know is I was entertained by De Niro's performance and Levinson's story.

*It sort of reminds me of this piece in To Kill a Mockingbird:

“Don’t talk like that, Dill,” said Aunt Alexandra. “It’s not becoming to a child. It’s – cynical.”

“I ain’t cynical, Miss Alexandra. Tellin’ the truth’s not cynical, is it?”

P.S: the fact that De Niro plays the aforementioned film producer, and actually produced this film, is just a classic inside joke.