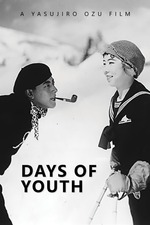 Going back to a film not found on Criterion Channel to wrap up my Yasujiro Ozu marathon:

I began this chronologically with the snippets of A Straightforward Boy, having never seen anything from Ozu before. It’s jarring to jump backwards in time from the very end back to the beginning. Days of Youth exhibits almost no style in the camerawork and what’s worse is the story has very little to it either.

I was expecting a college comedy, something that would balance pathos and poignancy with Ozu’s expert touches of humor. It was this balance that got me hooked on him, but it’s absent here. Days of Youth is a meandering, uneventful movie about two young men attracted to the same girl. There’s a couple of funny moments, particularly when one of them gets wet paint on his hand and tries his best to conceal the fact from the girl.

But one of the pair is simply mean-spirited, and it’s weird that they’re even friends since they are so antagonistic to each other. Ozu’s Odd Couple? Except there’s no humor in their personalities being opposite, they merely try to one-up each other and cut each other out of time with The Girl.

The Girl gets not much to do other than be an object to sit and sip tea with them, so it’s also weird why they are both SO obsessed with her. Unfortunately, the entire movie hinges around this obsession, leaving Days of Youth a simple, disposable comedy hardly worth mentioning if it weren’t for the man behind the camera.