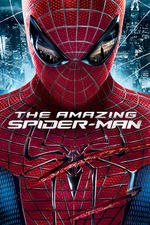 The worst movie I've seen in years and the worst summer blockbuster I've seen since 2002's "Star Wars: Episode II - Attack Of The Clones". At least "Indiana Jones And The Crystal Skull" had the killer ant sequence. I can't think of a single standout scene in "The Amazing Spider-Man".

I thought it was dreadfully dull, if I had been a kid I would have been bored out of my skull. It's some of the laziest plotting I've ever seen. The main villain walks in, gives exposition, and walks back out. Every character is conveniently connected. Peter's dad worked with the Lizard, who in turn is the mentor of Peter's love interest, who is in turn the daughter of the police chief, ect.

Anything potentially confusing in this predictable paint by numbers plot is helpfully illustrated by computer graphics and narrated. Every screen displays an animation telling you what's happening and has an accompanying computer voice. Gwen's working on the antidote consists mainly of standing around next to a computer display that blinks "ANTIDOTE PROCESSING."

The Lizard wants to detonate a bomb that will turn everyone into a lizard. He's already a lizard, so this bomb poses no threat to him... yet instead of just detonating the bomb right away, he sets it for a two minute timer. I half expected him to cackle "Two minutes! That's just enough time for someone to stop me! Ha ha ha ha!" Other examples of lazy ass plotting abound.

The worst, most unbearable part was Andrew Garfield's twitchy, slack jawed, overly showy performance as Peter Parker/Spider-Man. There was not a single minute when I found him to be a sympathetic, realistic, or interesting character. I actually found him quite off putting. Maybe his Parker was supposed to be borderline autistic, but I don't think so. Garfield's tic-ridden acting style was ridiculous and distracting, like a fourth rate James Dean wannabe. There's one scene when Gwen is tending his wounds, and he's trying to romance her. He grins and waggles his head in a way that no real person would ever do. Peter Parker never seemed relatable at any time, and Garfield never seemed likeable or real.

"The Amazing Spider-Man" is already a tremendously popular film. I know many people will strongly disagree with this review, and actually enjoy the film. Good for them. But, I have to be honest and say I thought it was flat out terrible. If I wasn't reviewing the film as part of a work project, I would have walked out and gotten my money back. As it is, I'm very glad that I went to a 2D matinee, limiting my loss to only six bucks.