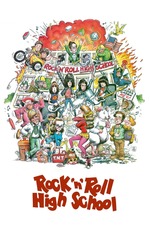 "Rock 'n' Roll High School" is one of my absolute favorite "fun films." It is pure, unadulterated celebration of life & freedom of spirit.

In all honesty, there was little if any chance I would rate this film in the low range. I am a diehard Ramones fan, and this film not only features the Ramones but plays their music throughout the film. To this day, The Ramones and Stray Cats remains my favorite concert ever.

This film blows away any of the remakes or follow-ups...never again was a filmmaker or cast able to capture the innocence, fun and spirit like this film does.

This special DVD version includes a tribute to Joey Ramone...I remember feeling such great sadness the day he died. I sat around singing "I wanna be sedated" all day long.

There are multiple things I love about this film...first, all the performances are fun and lighthearted including PJ Soles, Vince Van Patten and Dey Young. These characters are not your traditional characters...perhaps that is why I love them so much. Vince Van Patten, the football player, is actually insecure with girls and awkward socially...what a refreshing change of pace. PJ Soles, while rebellious, is not vicious or mean or slutty...she is simply rebellious. In fact, all the girls are remarkably diverse in this film. The film doesn't just pick large breasted, plastic looking females to play the "hot" teens...you have females of all shapes and sizes and ethnicities...all treated in the same manner. How incredible!

The film is directed by Allan Arkush, with uncredited support by Joe Dante and Jerry Zucker. (All also worked on the script).

Don't get me wrong...I'm aware that this is not an award-winning film...to my knowledge it never won anything. It is a simple, joyous film that offers the viewer a good time and a bunch of smiles. The soundtrack? Obviously loaded with Ramones tunes and a joy to listen to...The costumes here are so wonderfully late 70s...down to some of the greatest glasses I've ever seen.

Why couldn't high school have really been like this?