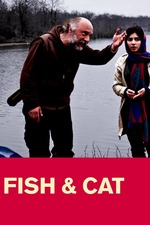 Not since Alexander Sokurov's Russian Ark has the single take been attempted at such a grandiose level. Shahram Mokri's first feature length film is an exceptionally audacious, experimental and risky project, which not only defies the meaning of the word 'genre', but also transcends any characteristics standard to the genre film. Fish & Cat is at once a suspense, a thriller, a horror, a romance, a coming-of-age, and a cinematic exercise in stretching the boundaries of the medium.

The film starts with the suspicious Babak, and slowly expands its cast as the camera moves from forest to forest and coast to coast. Some of our questions are answered - others are not. But even this minor attempt at filmic omniscience is much more liberating than the traditional genre film. Mokri opens up dimensions of possibility with Fish & Cat, and further expands a growing practice initiated by Sokurov, which has lately been reinforced by Sebastian Schipper's Victoria.

Fish & Cat is constantly engaging despite its occasional glaciality. One can feel the authenticity of each character involved, and some of the relationships defy any expectations of artificiality and connect the viewer with the film as an experience. Indeed, Fish & Cat is so striking in its presentation that the film begins to feel less of a creation, and more of a recreation - as if the events of the 90s are actually being presented to us, in real time.

One must ignore the structural faults and editing challenges, because the location in which the film is set makes the issue of fluidity particularly difficult. Yet one can easily forgo these minor faults, and delve into the film's atmosphere, its striking cast, and wonder not only about the possibilities of the film itself, but also of the medium at large, with the growing capabilities of cheap technology, and the increasingly sophisticated modern man, invigorated by globalization, education and contemporary passion.

Fish & Cat is an essential film of the new century - perhaps it lacks the raw, emotional focus that makes Victoria a masterpiece; nevertheless, Fish & Cat is a fine film, and arguably one of the most sophisticated films of the decade.