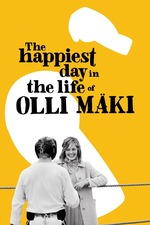 A completely charming, disarming Finnish film, based on a true story, about a boxer who falls in love whilst preparing for a world championship fight. Shot in grainy monochrome, it reminds me a little of Truffaut in its grace notes (lovely, self-contained sequences of children) and also of Half Nelson – with its eye for an arresting, unexpected image or sentiment – though its sensibility, and its sense of humour, are all its own.

Whatever their quality, boxing movies tend to be bruising noirs about proud patsies (Body and Soul, The Set-Up, Champion), shameless stories about underdogs (Rocky) or cynical, bruising portraits of disconnected losers (Raging Bull). Olli Maki, with its humble hero, quiet humanity and knockout ending, could scarcely be more different.

Occasionally it seems unfocused or long-winded, but the performances from stage star Jarkko Lahti (as Olli), newcomer Oona Airola (as his ordinarily beautiful new girlfriend) and Eero Milonoff (playing his ex-champ of a manager) are really fresh, credible and well-judged, the bits of off-kilter humour mesh nicely with the affecting central storyline, and the film’s blending of realism, sweetness and surprise makes it a richly enjoyable experience.

A cracking start to the festival from debuting feature director Juho Kuosmanen – who won ‘Un certain regard’ at Cannes for this one.