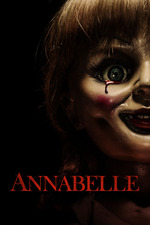 Earning a firm place on the list of cinematographer’s unfortunate attempts at directing, John R. Leonetti’s ‘Annabelle,’ a prequel/spin-off to a subplot from 2013’s extended universe starter ‘The Conjuring,’ is technically assured though lacking in anything innately original or insidiously creepy. Taking itself surprisingly seriously, Leonetti leaves the heavy lifting to our familiarity with the primary material and our lowered expectations with carbon copy.

Basically another bargain-basement housewife-in-peril horror film, Gary Dauberman’s script plays like a cheap ‘Rosemary’s Baby’ knock-off, attempting to prove that an L.A. apartment complex is just as spooky as anything you’ll encounter in Manhattan: it’s Southern California in the ‘70s and cult mania has overtaken the collective cultural consciousness thanks to - who else - Charles Manson and his family. In Santa Monica, a bright young couple, John (Ward Horton) and Mia (Annabelle Wallis), are expecting their first baby while John works his way through medical school. Avid churchgoers, they bond with the older couple next door whose daughter, Annabelle, ran off, apparently with a cult. Suddenly, in the middle of the night, the daughter murders her parents with the help of another devilish cohort and accosts Mia and John. Returning home and doomed to bed rest for the remainder of the pregnancy, Mia notices something is wrong with one of the dolls in her collection, the doll that Annabelle had been clutching to her chest when she died.

Opening with a statement that informs us that not only have dolls been cherished by children throughout the ages, but they are also objects utilized by sources of evil for their own malignant designs (naturally, we end with an oh-so-serious quote about evil and vigilance from the esteemed Lorraine Warren), ‘Annabelle’ heavily implies that dolls are as equal a familiar as, say, creatures of the feline persuasion. But these flourishes are merely an awkward and intentionally funny pair of statements that highlight the film’s desperate need to seem like an honestly scary endeavor.

However, the only successfully creepy elements in ‘Annabelle’ are primarily due to what Wallis is able to believably cull from a series of token treacheries she’s faced with throughout this extended liaison with the demon. Chased through her apartment by a young girl that morphs into the adult cult member Annabelle in the blink of an eye or a face-off with a charcoaled demon in the bowels of her apartment building’s storage facilities represent two of the film’s more vivid moments. However, not only fleeting, they also seem directly lifted from James Wan’s other, superior efforts.

The late introduction of an integral character played by Alfred Woodard reveals the film’s laziest gimmick during its decidedly flaccid finale, especially considering that the why and wherefore of Woodard’s relationship to the troubled Mia is never fleshed out in any regard. “Crazy people do crazy things” is the repeated explanation for what is going on, why rebellious youngsters join cults and use black magic to assist evil, twisted demons escape from creepy inanimate objects and into human bodies. If only purportedly scary movies could also do scary things with such whimsical nonchalance, then maybe we’d all be satisfied with output like ‘Annabelle.’ It’s all a far cry from Wan’s superior haunted-house efforts, which embraced the thrill of the paranormal even as it respected its frazzled, earthbound characters.