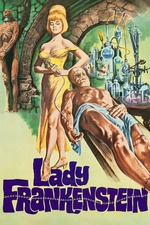 This is what we used to call in my day "A 94 cent screamer," the Sunday afternoon horror movies sponsored by the local rock station Q-94, with change back from your dollar.
In 1971, it seems only natural that the Frankenstein Universe would expand to include a Liberated Lady with a mind of her own.

On first glance, I thought this was a Mercury Theatre offshoot, with Joseph Cotten doing a favor for his best friend's nephew on his first time out. Mel Welles is no relation to Orsen. Having come up through the Roger Corman factory, Welles had a lengthy filmography in titles like "Tip on a Dead Jockey," and "Rented Lips."

And Joe Cotten and Mickey Hargitay may have just needed the work.

The film itself is a stitched-together creation with everyone acting in a different picture. Cotten is delivering Golden Hollywood, while Hargitay (with unapologetic American accent) is playing a TV detective. Queen of Italian Biblical epics Rosalba Neri (billed as Sara Bey) knows it’s a horror film at the heart, but she can’t escape her wardrobe long enough to let loose her mayhem.

And the stitching shows most in the looping, which is heavy-handed and off-tone. The art design owes much to Dark Shadows, meaning there is plenty to look at when the scenes go on too long. Music by Alessandro Alessandroni is too experimental and atonal to rescue the production. The Creature himself is a tribute to the classic Monster, with a few original touches. This is not where they spent the money. Look for it in the background among the jars, and levers, and Jacob’s Ladders, and all the magenta blood.