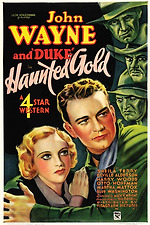 Oh Man! WTF! Not only is this film a bad, and I mean really bad B-western, it is vile on top of it all. I have a high tolerance for B-movies, I expect then to be pretty poorly made, badly acted, and all of that, but there is a charm to B-movies that is irresistible. Unfortunately, Haunted Gold has all of the bad with absolutely none of the charm. It is just a badly made, badly written, badly acted conglomeration of Western and early ghost story/horror movie tropes. A monstrosity of a film. Bad by even B-movie standards.

However, it is not the fact that it is a terrible B-movie that offends me, that I could live with. Haunted Gold is full of horrible, racist imagery and language. Blue Washington's character is written to exhibit all of the worst stereotypes of African-Americans - his character is a childlike, clumsy simpleton, afraid of his own shadow. He talks with an exaggerated, thick mumbling dialect and accent. The bad guys call him "the darkie." John Wayne's character, his boss and friend (purportedly) calls him "Boy" on at least one occasion. Mr. Washington pretends to be a ghost at one point to scare the villains. He is found out not because the very idea is ridiculous, but because the villains just can't believe that a phantom would talk with that "watermelon accent" (apparently African-Americans are derided for enjoying watermelon. I like watermelon. I like it even more now just to spite all of racist a-holes out there). Some people will tell me that Haunted Gold was made in 1932, so we have to allow for the times and give it a certain lee-way. I say eff that. I can allow classic films a great deal of lee-way and accept any number of things that are no longer acceptable, but Haunted Gold is just so chock full of racist awfulness that I cannot let it pass. To quote a friend of mine, this film is so awful its very existence makes the world a worse place.