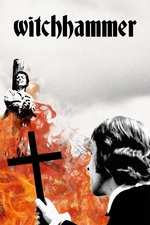 While many films about the witch trials would focus on the more lurid aspects like the torture and degradation of the victims (especially the women), Witchhammer is a much more serious take on the topic and was based on the Northern Moravia witch trials which occurred in the Czech Republic from 1622-1696. The spearhead of these trials was a man named Jindřich František Boblig who was brought out of retirement to resume his work as an inquisitor. The film is centered around the beginning of the hysteria in the Moravia region that provided the perfect atmosphere of fear for Boblig (Vladimír Šmeral) to conduct his loathsome work.

Although Witchhhammer is often marketed as an exploitation film, the way it is executed is more akin to a historical piece with arthouse trappings. It came out on the tale end of the Czech New Wave bubble and some of the stylistic choices (artfully framed scenes, poetic interludes from a mysterious monk) give the aesthetic a decidedly Gothic feel. It is filmed in black-and-white which dampens some of the more gruesome and bloody torture scenes. The score, an ever present foreboding drum beat, brings to mind some sort of death march that cannot be stopped.

It is not uncommon for directors to use long past historical events as an allegory for present day social commentary--it is much easier to get the film past the censors if the critique is left as subtext in a by-gone era. Even so, Witchhammer was still banned on its release by the Czechoslovakian government. This film was made during a volatile period of history where the Czech people were being subjugated under communist rule called the "normalization".

Running parallel to the narrative about the witch trials is an understated romance between a priest named Kryštof Lautner (Elo Romančík) and his young beautiful cook Zuzanna (Soňa Valentová). Because of their different stations in life they are unable to publicly be together. Unfortunately Zuzanna gets accused and after being tortured and abused gives a false testimony that says Lautner was involved in witchcraft and pagan rituals. Seeing them interact is absolutely heartbreaking because Zuzanna is literally driven mad by her pain and grief. Women are the main targets of these trials, even more evidenced by this quote uttered by the shadowy monk: "The womb of woman is the gateway to Hell. Through woman, sin came into the world. Woman is sin."

Although many poor people were killed in the witch trials, eventually it became lucrative to accuse rich people as well in order to take their assets (and towns would pay the inquisitors to find witches for them). Boblig is depicted as a greedy and covetous man who cares not for the truth and only wants the money and power that being an inquisitor can give him. There are two interesting traits about him that hint at his inner character: although he dresses in fine clothes his shoes are always dirty and in a state of disrepair, and he has black decayed teeth that are sensitive to cold. Whenever he drinks wine he requests a pitcher of hot water be brought to him so that he might warm up his own cup (which he unceremoniously tests with his finger). Both of these things point to a man who might look like a powerful authority figure but in reality is rotten to the core. One could say the same about any fascist regime, most of which focus on keeping up appearances to hide an unstable center.

Witchhammer is one of the most nuanced and philosophical of the witch trial genre and well worth watching as both a historical drama and an interesting political allegory for the early '70s Czechoslovakian era.