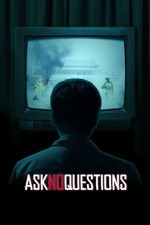 It's surprising to learn Jason Loftus isn't a journalist when he approaches the making of this documentary with more straightforward journalistic integrity than you'll find at many major publications. His history with the topic is stated from the very beginning, he presents arguments from both sides, and he never passes judgement even while his business is blackballed and his wife is cut off from contact with her family. If almost any other filmmaker made this film it would involve more screaming.

Asks No Questions is a straightforward and levelheaded approach to the Tiananmen Square self-immolation incident, a 2001 protest turned public suicide which may or may not (but very likely may) have been orchestrated by the Chinese government in order to turn public opinion against the religious group they were (and still are!) subjecting to an ongoing campaign of torture, murder, and organ harvest.

And no, this isn't some far-fetched conspiracy theory. China has had sanctions levied against them for their treatment of Falun Gong as recently as last June and the authenticity of the 2001 event has been questioned by such major players as Human Rights Watch, National Review, and The New York Times. Ask No Questions isn't exactly covering unexplored ground. What it does do is feature Chen Ruichang, a Falun Gong practitioner who was imprisoned and tortured when he pointed out the government's account of the incident bore an eerie resemblance to the very state propaganda he had spent his career helping them produce.

Directors Loftus and Eric Pedicelli cram a remarkable amount of information into just 80 minutes and they do it in a way that — unlike the title suggests — requires the audience to ask most of their own questions. That the filmmakers approach the topic in an almost encyclopedic way and still manage to make it interesting is a testament to their skill. Chen's story is captivating but appears more than happy to take a back seat and raise a glass to the people who weren't as lucky. And that the film's questions don't have real answers will keep the topic haunting the minds of its viewers long after the credits have rolled.