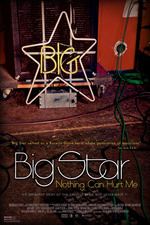 Big Star: Nothing Can Hurt Me

Any film that sets out to play a bunch of Big Star music and talk to people in the know about how it was made and why it’s great can’t really go wrong, and this one doesn’t. But while the early acts offer engaging coverage of the birth of Memphis’s legendary Ardent Studios, Big Star’s formation, and the great records that followed, what comes after is a bit murky. There is much hypothesizing about why the band never found commercial success, but little explanation of the posthumous growth of its passionate cult following.

Also, I had hoped to get more insight into the elusive psyche of deceased Big Star founder Chris Bell, whose contributions to the band’s sound always resonated with me a bit more than those of his more famous creative counterpart, Alex Chilton. Interviews with Bell’s family and friends don’t turn up much more than the familiar tortured artist trope, but his resultant spectral presence in the film left me oddly satisfied that he apparently remained a mystery to pretty much everyone.

As band-that-should’ve-been stories go, Big Star: Nothing Can Hurt Me isn’t a crowd-pleaser like Anvil! The Story of Anvil and its subject isn’t as unorthodox as that of A Band Called Death. But it does shine a deservedly warm light on some remarkable music.