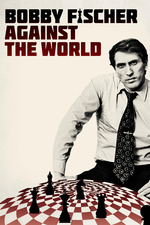 Bobby Fischer Against the World

You don’t need to know anything about chess to enjoy Bobby Fischer Against the World, but you may well want to learn more about the game after you’ve seen the film – if you don’t take it as a cautionary tale.

Bobby Fischer’s story is a true American tragedy, and possibly the twentieth century’s most fascinating example of the tenuous divide between genius and madness, as this film makes abundantly clear. The pacing is a bit uneven, but it lingers in the right spot, making a suspenseful centerpiece of Fischer’s era-defining 1972 world championship match against Boris Spassky. The absence of an interview with Spassky, who declined to participate in the film, is surprisingly inconspicuous, which is a good indicator of the storytelling acumen at work here. The people who were interviewed, who encountered Fischer on and off the chess board, paint a captivating portrait that is as well-formed as it is enigmatic.