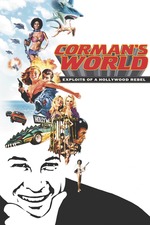 To begin with, I have no small amount of reverence for Roger Corman. Untold hours of my youth were spent in front of a 13″ television that screened the most outrageous low-budget horror movies my local video store had to offer. Aside from the cheap thrills provided, there was something inspiring about their scrappy production values: a sense that limited resources and skills need not obstruct one’s dreams, and that a creative endeavor’s ostensible shortcomings could make it that much more endearing. Many of these movies bore Roger Corman’s name, and all of them carried his DNA.

And yet, by his own admission, Corman’s fifty-plus years operating on the fringes of the establishment were always about turning a profit above all else. He had his finger on the pulse of a particular segment of the movie-going public, mastered the economics of bringing them what they wanted, and made a rather comfortable living doing it. It’s more than a little ironic that what is essentially cinema’s punk rock was born of good old-fashioned capitalism. For Roger Corman, art was incidental.

It’s true that in the process of putting his name on hundreds of B movies, he fostered a lot of talent (Jack Nicholson, Francis Ford Coppola, Martin Scorcese, and many more) that went on to do great things. They appreciate him for it and so should we, just as we should appreciate what his savvy did for the development of independent film at large. But for a man whose goals were rooted in finance and independence, it seems odd that a documentary called Corman’s World: Exploits of a Hollywood Rebel should be so indignant about the lack of recognition he has received from the creative establishment, to the point that framing his 2009 Academy Honorary Award as some kind of vindication is vaguely insulting. The beauty of Roger Corman is that he managed to be successful as an outsider. Who cares what the insiders think of him?

Not of This Earth