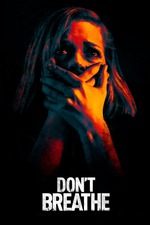 In 1967, Terence Young, director of several 007 movies, gave us Wait Until Dark, in which a blind woman is terrorized in her home by criminals who believe their contraband is hidden there. Its title, a command, refers both to its villains’ nocturnal scheming and to its heroine finding empowerment in her disability.

In 2016, Mike Flanagan, whose Oculus was a modest horror hit, gave us Hush, in which a deaf woman is terrorized in her home by a psychopath for no particular reason. Its title, also potentially a command, refers to its heroine’s general state of being, I guess?

Several months later, Fede Alvarez, of Evil Dead reboot fame, gave us Don’t Breathe, in which a blind man’s home is besieged by a trio of young burglars. Its title, yet another command, refers to its burglars’ best defense against their victim, who, as it turns out, is not the easy target they thought he was (and might also be, like, a monster).

Don’t Breathe doesn’t eclipse the classic Wait Until Dark, but it runs circles around Hush, getting a surprising amount of white-knuckle mileage out of a deranged blind guy chasing a bunch of kids around his house. The house itself – isolated in an otherwise abandoned Detroit neighborhood, full of banalities that reveal themselves to be horrors – is ultimately the film’s most interesting and well-developed character. I’d love to see a stage production of Don’t Breathe, which would necessitate an ambitious, labyrinthine set in the vein of The Life Aquatic with Steve Zissou. (Not coincidentally, Wait Until Dark originated on the stage.) That said, it would have been nice to see the actual human characters fleshed out more. A bit more dimension would take Don’t Breathe from good to great.