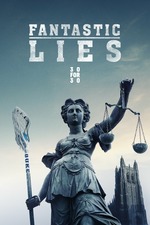 Setting out to portray a bunch of rich, white college athletes as victims, Fantastic Lies is acutely aware that, even with the facts firmly on its side, it has its work cut out for it. It takes great pains to demonstrate Duke University’s socioeconomic contrast with the community it abuts, and the fact that the school’s venerated lacrosse players are no angels. It acknowledges the epidemic of rape on college campuses, and is careful to make a villain of Durham’s corrupt district attorney rather than the disadvantaged black woman who brought the false rape accusation against the athletes. And at times it seems desperate to give the media a pass for perpetuating an irresponsible, nationwide presumption of guilt. These are not unreasonable instincts, because even in their innocence, it’s hard to feel much sympathy for the young men at the center of this scandal, for reasons one of the men himself makes clear:

This entire experience has opened my eyes up to a tragic world of injustice I never knew existed. If police officers and a district attorney can systematically railroad us with absolutely no evidence whatsoever, I can’t imagine what they’d do to people who do not have the resources to defend themselves.

And that’s the story in a nutshell: rich dudes survive a criminal justice system that eats poor folks alive.

If we wanna talk about the massive flaws in the system, there are plenty of way more fucked up stories to choose from. Stories whose protagonists can’t and don’t win. Stories that haven’t already spent over a year playing out on the front pages. And, hell, stories that don’t give dangerous potential credence to the myth that false rape reports are at all common.

All of this isn’t to say that Fantastic Lies isn’t a well-made documentary. It’s just shining a light on something that’s already very well-lit.