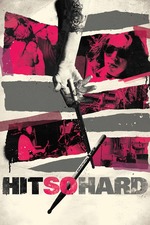 There’s a good story in here somewhere, but unfortunately this documentary about former Hole drummer Patty Schemel doesn’t seem to have much faith that it can reach very far outside Hole’s fan base. A lot of narrative polish it might have employed for the sake of the rest of us is eschewed in favor of making sure the fans get to hear about every last moment behind the scenes (and making damned sure everyone knows Schemel spent a lot of time with Kurt Cobain). The result is a first draft at best, overlong and stylistically overwrought. The screen is often split into as many as five pieces of action, lengthy passages of text are expected to be read concurrent to unrelated voiceovers, and half the interviewees are miked poorly enough to be borderline incomprehensible. Meanwhile, the mostly linear chronology chooses to flesh things out with backstory at puzzlingly inopportune times, as if to say, “Oh, and I forgot to mention...”

As I said, there’s a good story in here somewhere, particularly about what Generation X’s unexpected time in the spotlight meant for women other than Courtney Love, and Hit So Hard does attempt to address that. But ultimately its sloppy storytelling just left me weary and glad to put it behind me.