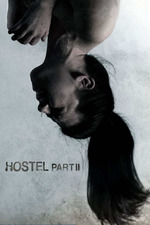 I was similarly impressed going into Hostel Part II, which puts a new trio of college kids on the chopping block but adds a narrative layer from the other side of the blade, showing us how the plans are set in motion to seal these kids’ fates. It’s not an unusual trick for a sequel to essentially repeat its predecessor with added backstory that saps both films of any and all mystique, but Hostel Part II manages to keep things interesting by offering us a glimpse into the mindset of its villains, seemingly normal men who are willing to pay big bucks for the chance to disassemble undergrads.

With a little less marketing savvy, it might have been called Hostel II: The Switcheroo, mainly because the protagonists are female this time, but ultimately because of the twist it introduces toward the end. It’s actually not a bad twist, but we don’t have much opportunity to enjoy it, as it apparently signifies the editor’s cue to dispense with the careful pacing and get this thing done in under ninety minutes already. The resulting rushed ending is deeply unsatisfying.

If I’m going to become an Eli Roth fan, I’ll need to see him build on the promise of the first Hostel. This sequel just doesn’t do it.