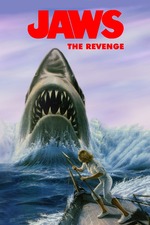 In Jaws: The Revenge, Ellen Brody becomes convinced that the various, oversized sharks that have tormented her family over the last twelve years are somehow associated, or organized, or something. Whether Brody is wrong or right, there’s some fun potential in the concept. However, despite going so far as to hint that she may even have some kind of psychic connection with the shark du jour, Jaws: The Revenge doesn’t commit to its lunacy, and its conclusion is the least satisfying of the series.

I Saw the Devil