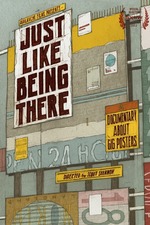 One of the smartest things Just Like Being There does is to go out of its way not to ignore the “gig” part of “gig posters”. The film is thick with music in both the background and foreground, and the handful of live performances it features do a good job of capturing that certain kind of magic that only a great rock show can provide. Capturing that magic is also the goal of the posters that are the film’s main focus, but I use the term “focus” lightly. This documentary’s enthusiasm for its subject is both its biggest strength and its biggest weakness. It’s kind of like listening to a kid excitedly describing her trip to Disneyland: the story is all over the place and much too long.

The screening I saw was the world premiere, and the film had just been finished a few days before, so hopefully there is still more editing in its future. For now, it’s a mess of decent content desperately wanting for structure.