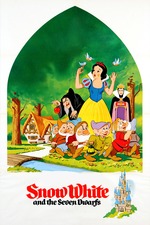 Apropos of nothing, I’ve decided to watch all of Disney’s theatrical animated features in order of release date. Since Wreck-It Ralph’s release in November will bring the grand total up to fifty-two, it will take me exactly one year to watch them all if I do one film per week.

The marathon began tonight with 1937’s Snow White and the Seven Dwarfs, a film of such tremendous historical significance that it’s almost impossible to judge it solely on its own merits. It was a given that the creators of the first full-length cel-animated film would have a home in the history books, but it was less foregone a conclusion that that film would be so stunningly executed, an enduring work of breathtaking artistry.

In the 1930s, most animated films were sitcoms whose stories were merely convenient vessels for copious sight gags. Born of that tradition, Snow White’s narrative is pretty thin (even by fairy tale standards), and its feature length is padded with numerous sequences of the madcap antics of the seven dwarfs, whose humorous potential was essentially the film’s raison d’être. While this might weaken Snow White as a feature, it is still eminently watchable as a masterfully crafted collection of shorts, whose cinematic contributions and influence just happen to be enormous.