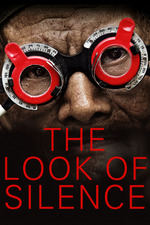 As the counterpart to the devastating documentary The Act of Killing, which showcased death squad leaders gleefully dramatizing their unpunished roles in Indonesia’s 1960s genocide, The Look of Silence is less pronounced but more affecting. Focusing this time on the family of one of the estimated one million victims, it follows optometrist Adi Rukun as he calmly confronts his brother’s murderers, who are readily accessible and forthcoming with gory details. While the previous film tangled with notions of guilt and shame primarily, as one critic put it, as “a structuring absence,” this one’s inquiry is more direct, by virtue of its protagonist having skin in the game. You butchered my brother with machetes and dumped him in the river. How does that make you feel?

If one felt that card-carrying mass murderers were entitled to certain standards of decorum, she might be put off by the bait-and-switch nature of the interviews, several of which are conducted under the pretense of an eye exam. But a more forthright approach is unlikely to have gotten anywhere, as the men’s delight in recounting their offenses evaporates when they realize they’re in the rare presence of dissent. If these interviews were boorish, Jerry Springer-style sneak attacks, defensive reactions might not be unwarranted. But Rukun, to his infinite credit, seems to be possessed of a genuine, sober curiosity. And yet, under only gentle prodding, the perpetrators are quick to shift the responsibility to their superiors and insist that the matter be left “in the past.”

Cowardly cop-outs though they are, these latent pangs of conscience would be encouraging if they indicated any kind of broader trend. Alas, as footage from Rukun’s son’s classroom shows us, the Cold War propaganda that glorified the murders is still codified in Indonesia’s national identity. And half a century after the genocide, the threat of being attached to the bogeyman of communism is still potent enough to keep most mourners silent.

If a reckoning ever comes to Indonesia’s ruling class, The Act of Killing and The Look of Silence will have done their part. Until then, they are solemn reminders that history is written by the winners.