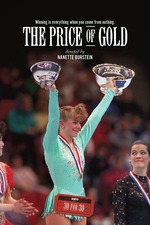 The Price of Gold

It always seemed to me that Tonya Harding was not sufficiently contrite in public regarding her husband’s involvement in the attack on her rival Nancy Kerrigan. Harding was quick to assert her innocence, but she never seemed all that mortified that someone was assaulted on her behalf, and in this documentary twenty years after the infamous event, she still doesn’t. But she is plenty bitter, and while that’s no surprise coming from someone whose life was very publicly destroyed, it doesn’t do her any favors here.

The Price of Gold mostly focuses on Harding’s side of the story, putting a sympathetic lens on her abusive upbringing and perpetual black sheep status in the figure skating world. It is not a stretch to portray her as a tragic figure, and the film uses plenty of objective material to do so, but much of it is undermined by her indignation, which is never far from the surface of her interviews.

In profiling Harding, director Nanette Burstein remains impressively even-handed, managing a deft analysis of the facts and the media narrative, and avoiding simplistic demonizations of both women’s famous missteps (Harding’s initial hinderance of her husband’s prosecution and Kerrigan’s sour-grapes moment on the Olympic dais). But neutral as The Price of Gold is, when it leaves the question of Harding’s innocence open, it is hard to see that as anything but damning.