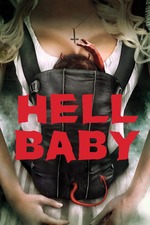 Upset at myself for not seeing this sooner. Not because it was the type of movie I should have seen, but because of the creative forces behind it. Not only is it coming from the minds of The State and Reno 911 stars Tom Lennon and Ben Garant, but it also stars Rob Corddry, Leslie Bibb, Keegan Michael Key, Paul Scheer, Rob Huebel, Riki Lindhome and Kumail Nanjiani, all of whom I love (you might think by "love" I meant "like"... Not the case. I love them.)
Hell Baby isn't the same kind of parody as Scream (ingeniously crafted and as scary as it is funny) or as Club Dread (just absolutely hilarious, yet following the genre tropes)- my two favorite horror parodies. It's an entirely different class in that it's an over-the-top silly play on the idea of the exorcism Film- a specific sub-genre that has never been parodied so well.
While it doesn't deliver laughs at the same rate as Wet Hot, The more recent They Came Together, or other Wain movies (David Wain is another member of The State), Hell Baby is quite funny and absolutely worth a watch (or two, due to its quotability).