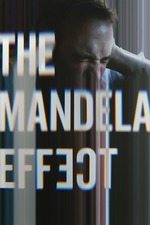 It would be a lie to say THE MANDELA EFFECT is a good movie. It is not.

But, it's still fun as a jumping off point for something to think about. As someone who's pretty convinced that we are in fact in some kind of simulation, it's at least fun to have a movie take that idea seriously.

Granted, with writing this bad, even the movie "taking it seriously" is itself hard to take seriously. There's a lot to complain about here: the writer (surprise, it was written, directed, and produced by the same guy) dumps every science trope into a bucket and then splashes the slop liberally across your face.

Some of the acting is pretty solidly "bleh" and a lot of it is pretty solidly "meh." The writing is bad, but even good writing wouldn't fix an obvious overarching attempt at "being deep." It is not deep. There are lines delivered that are supposed to make you go "wHOaoAOaoAOoa" but honestly you'd have to be a little reduced to be blown away. There's nothing deep or insightful here.

Robin Lord Taylor is delightful as always, but I wish he would play another character. I know him best as Oswald Cobblepot from Gotham and frankly if you take away the psycho evil from Cobblepot, RLT's character in this movie is identical. Maybe RLT just plays himself.

The ending is so *yawn*. Okay Brendan crashes the simulation with his quantum program. The screen goes black. A good writer would have done something unique or thought-provoking. This movie "restarts" the universe to just before the tragedy that sets Brendan off on his quest to crash the simulation. We see a DOS prompt resetting the simulation and running it up to the same moment when the movie started. Bleh. Ugh. I could smell it coming from a mile away, and there's no more boring way to bore a person than feed into exactly their expectations.

I don't regret watching this movie, but it skirts the line so closely it's hard to tell. Three stars is basically me saying that the movie is unmemorable garbage, but I still had a fun time. It's 80 minutes, so it's not like you're going to destroy an entire evening by watching this.

Anyway, the worst thing this movie does is show a DOS command line. No fucking way the universe is being simulated on a Windows computer.