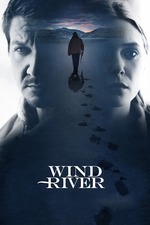 Somehow WIND RIVER flew under most people's radar, and that's a real shame.

I will grant this: It's a slow burn. A real slow burn. For those willing to put in the focus over the first 70 minutes or so, the payoff bounces you from anxiety to anxiety - but you know, in a good way.

Ah, the sound. It haunts me every time I hear it again. This film is made so much better by its sound.

This movie is - very nearly - perfect. As such, I won't spend much time on all the parts that are good. I'm a negative person by nature.

My biggest problem with this movie is the sound. I know, I said just moments ago that the sound makes this movie better. It does, but it was also mixed badly. I'm watching this on just plain old junk TV speakers, so part of this is on me (like, maybe 15%), but I've watched plenty of movies where I didn't need to lip-read to catch every line.

My last complaint is the aforementioned slow burn to get started, but even that is absolutely necessary given the setting, and the people you're getting to know on screen, and the general atmosphere of the movie.

Honestly, get a great sound system, tune it to boost human-range vocal sounds, and get ready for one of the best movies of the decade. Also get ready for a huge rollercoaster of emotions; this is not an easy movie.