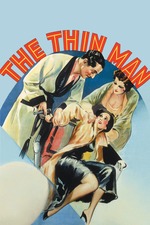 I watch this film every Christmas and never leave a written review, but this year I came across an article about it by Brenda Davies in the collected volumes of The Movie published by Orbis and thought I'd share it here. I've also scanned and uploaded the pictures to roddie.digital/films/thinman

The chemistry of the original film works brilliantly. Its mixture of sophisticated comedy, romance and detective story was exactly to the taste of contemporary audiences and its appeal is durable: when The Thin Man was shown for the first time in West Germany in 1969 it ran for more than ten weeks in some towns.

The complications of the 'whodunnit' plot are of no real interest. Frances Goodrich and Albert Hackett, one of several husband-and-wife writing teams who have contributed so much to American show business, made an intelligent adaptation of the novel by Dashiell Hammett whose convoluted plot was essentially unsuited to the screen. Their solution to the structural problem was the elaborate dinner-party sequence which does not occur in the book, and although it is not entirely satisfactory it at least disposes of the loose ends so quickly that the audience is unlikely to spot any flaws. In any case no-one is expected to take the murder and mayhem seriously and indeed the unpleasantness of some of Hammett's characters has been considerably softened. The special flavour of the film lies in the snap and crackle of the dialogue, which neatly captures Hammett's laconic style, and in the characterization of the two principals.

Nick Charles, Hammett's delightful detective, has none of the irritating self-righteousness of Raymond Chandler's hero Philip Marlowe. In fact he seems to have a great deal in common with his creator. Not quite a drunk, Nick is nevertheless happily but inoffensively pickled most of the time, although alcohol seems to stimulate the detecting process.

Nick and Nora, as represented by William Powell and Myrna Loy, have so much careless charm that it is very easy to overlook the flimsiness of the plot. Powell in particular puts over a fantastic confidence trick: the silky voice, the insouciant gaiety, the faultless timing, lend an air of authenticity to a set of wildly improbable incidents, and Miss Loy's matter-of-fact acceptance of each new crisis, her unruffled elegance and quick sympathy complete a relationship in which one gladly believes if only because of its pleasant air of mature sensuality. This was their second film as a team, the first being Manhattan Melodrama also made in 1934 by Van Dyke, to whom must go the credit for realizing their potential in spite of opposition from Louis B Mayer. In all the played together 14 times, including the six Nick Charles films. Their witty performances in The Thin Man are assisted by a well-trained fox terrier who plays Asta with an engaging lack of heroics and a health regard for his own skin, diving under the bed at the first sign of trouble.

Woody Van Dyke, who orchestrated the film so expertly, was a Hollywood craftsman whose 27 years of working life began under DW Griffith and included a number of exotic adventures in faraway places, as well as three of the five Thin Man sequels.

The Thin Man is variously reported to have been shot in 12, 14 or 16 days. Certainly it was done very quickly and a good deal of creative improvisation too place, including Nora's marvellous first entrance when she comes into the hotel laden with parcels and Asta straining on a leash. The dog rushes to his master causing Nora and her parcels to sprawl ingloriously over the threshold. Nick looks up from chatting to his guests, glass in hand, and gestures nonchalantly towards her recumbent form as he introduces 'My wife...'. This is what one finally remembers about The Thin Man: exchanges between two very talented performers, the speed, the fun and the wit of it. Nobody needs to remember who the thin man actually was.