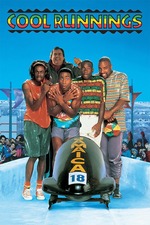 I am not a man who usually gets behind sports films. I dont play any sports in real life, hell I don't even watch any games on the Tv but I have to say Cool Running's won me over with it's light humour, strong characters and possibly the best sense of team spirit I have ever seen.

Cool Runnings tells the tale of the founding of the real life Jamaican bobsled team. It follows their journey from the sunny island in the Carribean all the way to the 1988 winter Olympic games in Calgary Canada. The story follows four very unlikely heroes who all share a dream of one day winning an Olympic gold medal and proving Jamaica can do winter sports just as good as any other country.

The acting in the film is terrific I could see from the interactions the characters had with each other throughout the film that they really were a team in the truest sense of the word. My favourite character had to be their coach who being a disgraced former olympian for america brings the team together and teaches them what it means to be a bob sled team. Overall the acting and writing were both witty, intriguing and hilarious at times.

If you need a film you can down relax too and have a lot of fun while you do that Cool Runnings is the film for you I plan to watch it again very soon.