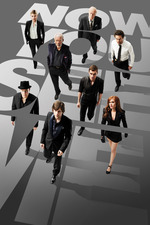 Now You See Me is a film I had the privilege of seeing in cinemas back in 2013 when it first released. At first I thought it was a good film but it wasn't anything special just another cool movie. Recently I saw it on sale in a store and I said what the hell I will give it another go I'm glad I did because my opinion of the film changed greatly.

Now You See Me is the tale of 4 street magicians brought together under one common goal. To put on the greatest three act show in the history of magic. The shows involve risky ventures such as robbing a bank, pulling of insurance fraud, and faking a death to have that person work behind the scenes. The story is intriguing, clever and get's you questioning certain facts you are provided with it all leads up to a shocking conclusion you won't have seen coming.

The acting in the film is superb. Big names such as Mark Ruffalo, Jessie Eisenberg, Woody Harrelson are present here hell they even have god himself Morgan Freeman and Michael Caine. The roles suit each of the actors well as if though they had been written specifically for them which they probably were. My favorite performance had to be from Jessie Eisenberg as Daniel Atlas who has the whole cocky, arrogant thing he did in The Social Network which is one of my favorite films of all time. In short the acting is perfect.

The film has a few moments with some pretty awesome action going on. The most notable has to be a fight using magic instruments between Mark Ruffalo and Dave Franco who by the way Marvel needs to cast as Gambit and get rid of Channing Tatum watch him throwing cards in this film and you will understand.

In short this a must see film, if you like films that make you think, laugh and be awestruck all the same time Now You See Me is the film for you.