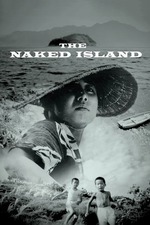 ''...in the calm green sea,
those swimming are we,
children of the sea''

The very definition of a cinematic poem, Kaneto Shindô described his intent to film The Naked Island as an effort ''to try and capture the life of human beings struggling like ants against the forces of nature." And so completely bereft of dialogue and with the use of diegetic sounds and one of the most beautiful and poignant scores perhaps created for a film, Shindô fulfils his agenda and places us smack-bang in the middle of a family of four's arduous attempt to eke out an existence in one of the most rapturously beautiful yet physically punishing environments on the planet.

I have often wondered what my life would be like stripped of all materialism, without a new film or album to look forward to exploring everyday, and what is on display here is just the struggle to survive day to day, where collecting buckets of water is the most gruelling of tasks. Shindô ensures we as the viewer, feel the weight and importance of every bucket transported up the sides of the hilly paradise island, where rarely a drop is spilt and there is little compassion for error. What really shines through amongst all the gritty day to day realism though is the magical moments in the mundane, where a child jagging a good size fish results in a family outing to trade it for a measly sum to eat one meal at a fancy restaurant and buy a new singlet for one of the children.

The cinematography is something that needs to be mentioned alongside the hallowed works of cinema also, because it is just stunning and sublime - every single shot deserves a wall in an art gallery. My most favourite shot in the film comes after a time of great turmoil in the final act where drama rears its head and one of the children dies before a doctor can arrive to save him, and in a life that doesn't allow time for grief, a mother stands a looks out across to the mainland at night as fireworks explode in the sky, almost as is they were designed to pay tribute to her fallen son. This scene and many of the scenes that followed moved me to tears.

It is such a shame that more of Shindô's work is not available for consumption, because I just wanna eat this guy up, and even though I have seen the marvellous Onibaba twice (his most acclaimed work) and have yet to watch Kuroneko, I think I have found his masterpiece already in The Naked Island - Simplicity is rarely as powerful as this.