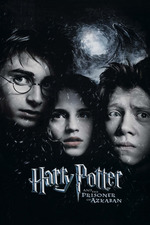 Harry Potter and the Prisoner of Azkaban

* I know i’m going to get a lot of flak for this, but i never found the Harry Potter books to be particularly great. Sure, they introduced us to a fascinating world filled with loads of potentially interesting characters and an intriguing premise – and that’s all the first book (and film) really was: a stepping stone into this fantastic world. But they never became more than that. For part one in a series, that’s fine. The remaining books, however (and as a consequence, the remaining films), never lived up to this set-up and instead became more and more convoluted; character arcs went nowhere or were bent because the plot demanded it; and more and more things got introduced that turned the established rules upside down. To me it is clear that J. K. Rowling went into writing these books without a masterplan and wrote herself into a corner numerous times.

Having said all that, imagine my surprise when The Prisoner of Azkaban turned out to be such a magnificent film!