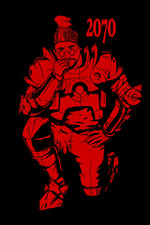 I have seen this pretty much once a week for months now. I have been trying to understand why I have such a deep fascination with this public skit for a long time now. I only really give 5 stars to films that I have a deeply personal and human connection with that I cant find anywhere else and this is a perfect example of that to me.

The idea of falsifying an alibi to be able to perform a fake Tedx is such a stupid concept but with the creativity of MDE, nothing seems impossible. Making the audience laugh whilst making fun of them at the same time, commenting on the pseudo nature of it all is beautiful. From the beginning, we are introduced to Sam Hyde and his classic out of breath routine where he, no matter what, is constantly out of breath.

The re watchability of it is astounding, every time I watch it, a new phrase catches me by surprise or I think more on a joke and why it works so well. Its only 20 minutes long but its soaked in such a bizarrely well written and well performed soup. Sam Hyde might have had help writing some of the jokes but this wouldn't be as powerful without his performance and some of his little mannerisms you pick up each time you watch it. His eclectic energy is captivating and really doesn't allow the viewer to get bored, the pure confidence and dexterity to pull off this monumentally autistic scene is nothing short of genius.

It saddens me that my favourite show MDE World Peace got canceled and that MDE as a whole isnt really a thing anymore. They managed to be more interesting and thought-provoking in 6 episodes than most shows are able in 6 seasons.
Honestly, nothing feels better than coming home from a shitty day at college to being snuggled up in bed, watching Sam Hyde proclaiming that we should kill the elderly and the disabled.

The world awaits our greatest coomers.